31 December, 2010
Hadiqa Kiani appeared on the morning show with Juggan Kazim, on dawn tv where the pop star was asked several personal musical questions. Hadiqa instantly replied and claimed "abida parveen" as her favorite as one the singers she looks upto or listens to. Other legends included, Ustaad Mehndi Hasan Sahab. Hadiqa, the philanthropist also mentioned about her flood relief efforts and other upcoming flood relief projects. The Star of multi linguistic languages, who has sang songs in: Malay, chinese, arabic, turkish, english, punjabi, urdu broke a breaking news that she will be doing "sindhi" and "balochi" songs too in future. Well, thats what we can expect from Hadiqa Kiani, she surely is unpredictable when it comes to her taste of style & music. Without a doubt, those songs too would be a hit! The morning show was broadcasted LIVE & Juggan (the host) also played the "rapid fire" questions with Hadiqa in which the musical diva talked about her ever changing sense of style and how she loves experimenting with her looks very often. She not only expressed her humble favorites from the Pakistan fashion industry but also encouraged young upcoming fashion designers as well. Hadiqa also spoke about "Bol", Shoaib Mansoor's Upcoming movie during the show, in which she has given her beautiful voice to in 3 songs. Fans get yourself ready to be moved! These songs are a guaranteed wonder for you! The Morning Show with Juggan Kazim on Dawn Tv, will be repeated at 4pm & 12am (PK Time Zone) today! Don't miss this interview!
Here are some exclusive pictures from the
Juggan Kazim's morning show on Dawn Tv: 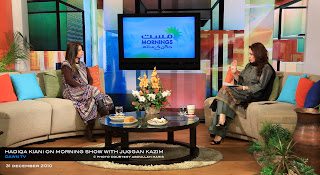 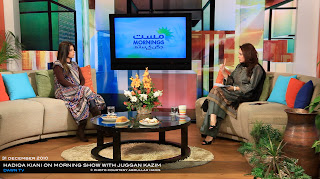 29th December, 2010
Hadiqa Kiani appeared on the famous show of Geo News Television "Capital Talk with Hamid Mir", as a guest and spoke about the 65 houses she has been reconstructing for the flood affected people. Hadiqa gave facts & figures while gladly briefing that 50 houses have been completed & 15 more are in progress. This philanthropist has been working non stop to motivate the people and also encouraging them to stay aware and not to forget the catastrophe caused by the flood. According to Hadiqa Kiani, "this is the time of awareness, people are still not out of the catastrophe, they still need homes - this is the reconstruction phase!"
The Host, Hamid Mir was stunned knowing that the beautiful singer had the courage & will to opt for such a dangerous area of "Mia Isa, Nawshera" which is commonly known to be neglected due to its far reach & also due to major problems of Taliban. On being questioned about her visits, Hadiqa appreciated the Pakistan Army, expressing her humble gratitude towards them and told how she was facilitated and given security during her efforts for the flood relief. Hadiqa also mentioned 'why' she chose such an area that was so far; "Its because according to the army, I was informed that Mia Isa is one of the most highly neglected areas that has been effected by the flood disaster and no one was willing enough to take an initiative to physically go there and see it with their own eyes, I chose to do so... and i instantly decided I will do as much as I can for these people by giving them homes", Hadiqa said.
Tune into Geo Television and watch the program "Capital Talk with Hamid Mir" which will be aired on 29th December, 2010 at 8:00pm. You don't want to miss this!!! Here are the EXCLUSIVE pictures of the show. Stay tuned for more. 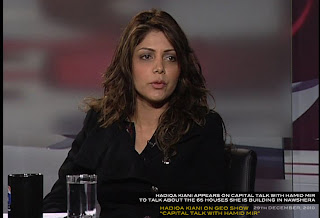 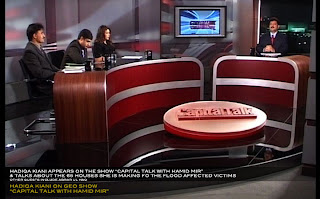 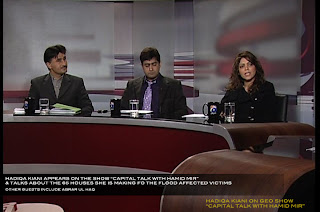 Hadiqa Kiani known for her live performance leaves the crowd jaw dropped as she entertains the listeners with her sweet melodious voice. Leaving the crowd no other choice but to appreciate & give her standing elevation for the versatile & her talent to sing a wide variety of multi-linguistic original scores, she is indeed a gem for the music industry of Pakistan.
click on the picture to see, download the large image
& set it as your desktop wallpaper! 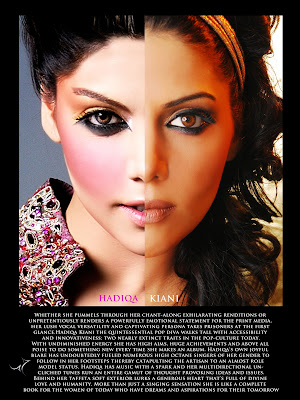 19th December, 2010
Hadiqa Kiani performed a LIVE concert at the doctor's conference held in Islamabad, Serena Hotel. Here is something for the fans...more pictures will follow ! 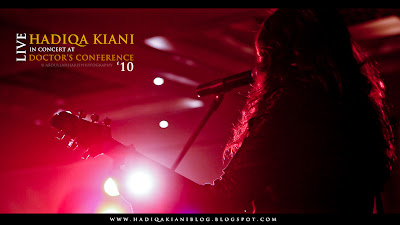 For years, the queen of pop has been endlessly giving music lovers a taste of new melodies, intertwined with sweet nectar of different languages. She has been heard singing in chinese, malaysian, arabic, english, punjabi before and other various multi linguistic languages. She has certainly proven how dynamic & versatile she is when it comes to music. The Diva truly deserves it! Indus Style Awards held in Mari, announced Hadiqa Kiani with great honor and called her on stage to present her; the most innovative singer  award. Hadiqa appeared on the stage wearing a long beautifully stitched dress, draped with golden textures and graciously accepted her award from Marina Khan (tv actor). She later moved the crowd with her mega hit song, "Janaan" and left everyone screaming "one more time". If that wasn't all, Hadiqa later had the honor to present the most prestigious award to Abdus-Sattar-Edhi Sahab, unfortunately he wasn't present on the scene. Later, Hadiqa also presented an award to Naseem Hameed (sportswoman of Pakistan) for her achievements.

Hadiqa Kiani is known for her versatile nature of music and the contribution she has given to her country in the field of music in various multi linguistic languages over the years, we can only expect this diva to be more unpredictable with time and deliver more food for thought, through her dynamic lingo melodies.

DOWNLOAD SIZE: 22x15''
For Hadiqa Kiani fans, if you like this wallpaper you can download the 22x15'' funky silhouette of this queen of pop with a followed wallpaper of the same theme. Get your desktop rocking with the queen! 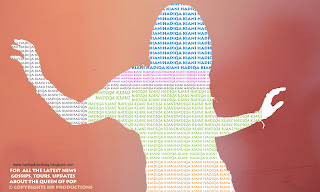 THE NEWS - INSTEP talks to Hadiqa Kiani about her visits

October 4, 2010 The News, INSTEP today interviewed Hadiqa kiani and asked her about her experiences & the humanitarian efforts she is putting in for the flood victims.
Instep Today: Which areas have you visited?
Hadiqa Kiani: The affected areas I have visited so far are Basti Kalraywala, near Muzaffargarh and 60 per cent of Nowshera. I recently visited these areas with the intentions to reconstruct and facilitate a certain portion of Nowshera due to the fact that the areas I have visited have unfortunately gone unnoticed by various donors.

Instep Today: Tell us about what you saw?Hadiqa Kiani: What I saw on TV was just 50 per cent of what I personally saw with my own eyes. Broken homes and teary eyes, so much pain in the overall environment, so much devastation, kids with skin infections, red eye problems, and pregnant women forced to spend their time in mere camps in an unhygienic environment with no basic maternal facilities. All they want is to go back to their homes before winter comes. What people don’t really know is that there have been two kinds of destruction; one being structural destruction and the other one is material destruction. The sad part is that we fail to understand or see that there is “still” a serious need to work on both types of destruction.

Instep Today: What relief efforts are you making personally?Hadiqa Kiani: I started my personal efforts from August 11, when I made a promise to myself and decided that I will help by any means necessary. I took out funds from my bank, called in my friends and family members to pool in for any type of help they could offer; ranging from clothes, food, medicine etc. My sister, two nephews and niece were the first ones to help support me. My other family members and friends supported me in this noble cause. My friend Saima Magsi’s husband who’s the general secretary of the Pakistan Union Austin Texas also arranged some basic funds from Dallas (Texas) from which I bought family packs from METRO including all the basic food items required for survival and needed in everyday life. I delivered those to the Army Flood Relief Camp, Fortress Stadium, Lahore. I repeated the same procedure of buying food items and dropping them at the army flood relief camp, quiet a few times. Other than that I also made a few appeals including one given in University of Central Punjab (UCP) to collectively help in this disaster. I got a great response from the students and its faculty. MashaAllah they collected funds through which they are going to reconstruct one of the small affected village known as Seeth Pur near Muzaffargarh. I do feel my campaign of helping the affected victims of flood did work well. I did another appeal in the school of the underprivileged children and was really touched the way they had collected food items, toys etc.

What about public involvement via your celebrity status? How has the response been?Hadiqa Kiani: As far as the appeals and appearances are concerned, the response that I have gotten has helped me in achieving a certain goal. But in my heart I am extremely insatiable and unsatisfied in regards to the efforts I have made till now. Doing something good in the name of humanity and for the sake of patriotism will always be less and feel less and my restless nature keeps me on my toes to do more and give more to my country.
Instep Today:
What is next on your agenda?Hadiqa Kiani: What I had gathered from my visits is that the affected victims need a shelter more than anything at this time and my mission is to get them that, InshaAllah by the support of people who trust me.
at 12:45 AM Links to this post