The third Pakistan Cultural and Sports Festival (Mela-2012) was held in Amsterdam on 3rd June 2012. Organized by the Pakistani Dutch community with the support of the Embassy of Pakistan, Mela 2012 was a sequel to the earlier two festivals held in The Hague in 2010 and 2011. Mela 2012 presented a welcome opportunity to Pakistani and other communities living in the Netherlands to come together and promote inter-cultural understanding through a fun-full day of cultural hues, sports, music and lots of delicious Pakistani food. The event attracted thousands from various communities living in The Netherlands. The event was inaugurated by Ambassador Aizaz Ahmad Chaudhry and Stadsdeelvoorzitter Achmad Baadoud of Gemeente Amsterdam. In his address, Ambassador Chaudhry greatly appreciated the positive spirit and energy displayed at the Mela by Pakistani Dutch community. He also presented shields to the organizing committee and sponsors.

Mela 2012 showcased rich Pakistani culture: sports, music, cuisine, and attractions for children and women. A fashion show exhibited Pakistani banarsi dresses. Music was played throughout the day, culminating in a musical evening featuring the leading singer Hadiqa Kiani. Despite the intermittent showers, the Festival venue remained jam packed with audience throughout the day. Families turned out in large numbers to feast themselves on the Pakistani food and enjoy traditional sports. The Mela reached its climax in the evening when Hadiqa Kiani enthralled the audience with her popular and hit national and regional songs. Imran Khan (a popular local singer) also fascinated the audience with his popular songs. The other local music talent also entertained the audience throughout the day. 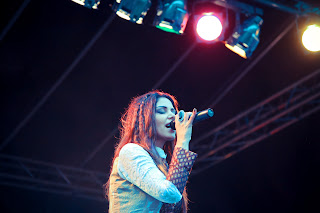 The Pakistani Dutch community has welcomed the support of the Embassy of Pakistan in organizing Mela 2012 in Amsterdam.


Pop singer Hadiqa Kiani has signed in to become the new face to leading UK retailer brand QUIZ. UK based fashion label Quiz offers stylish clothing to women. Recently the brand has introduced its new summer collection of outfit, shoes and accessories at its stores at Vogue Towers MM Alam Road Lahore and Mall of Lahore. The launch was marked by Pakistan’s style icon Hadiqa Kiani who is a loyal client of the QUIZ and now its brand ambassador as well. Hadiqa Kiani was officially introduced to the media with a press conference held in Quiz outlet Mall of Lahore.Hadiqa Kayani told, “I have always shopped at Quiz since 2010 and the reason behind my affiliation with Quiz is that I can easily relate to myself with the designs. They are trendy, stylish and easy to wear. As I call myself a free spirit and love to play with colours, therefore, I prefer to wear those outfits that exhibit my personality and Quiz is the brand that I can always bank upon.” Many media personalities also attended the Quiz event that was managed and covered by Encyclomedia PR. 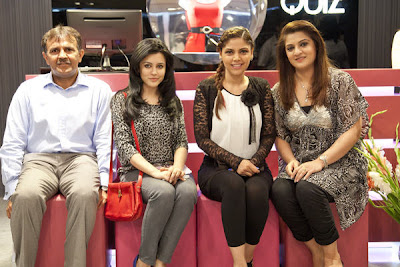 Video Courtesy E-News (link): http://www.youtube.com/watch?v=iQZXDa0fYKk
at 1:04 AM Links to this post