Forget lip singing over a casette player being played - It is a known fact, Hadiqa is considered to be one of the best live performances in the music industry of Pakistan. Hadiqa takes her business serious... and if its about just standing on stage and just doing a lip sync, she has second thoughts! Recently Ufone celebrated its 10th anniversary, held at Royal Palm, Lahore - hosted by Dino & Anoushey (Vj's) and ... ofcourse Hadiqa set the crowd on fire. The crowd was left ecstactic as the pop diva started off on a lighter note with a soothing english track from her rough cut album, "be with you" & mentioned her past collaboration with the legendary Aamir Zaki. Then ofcourse came the pumped adrenalin with her mega hit "Janaan" & left the fans screaming for more. But that wasn't all, people got to hear a pumped up version of Bohay Barian, Sohnya & not to mention - the Yaad Sajan. The crowd wanted to hear every song twice, atleast... and couldn't stop chanting "Janaan , once more, once more " till HK gave them exactly what they wanted. 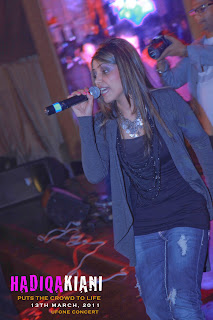 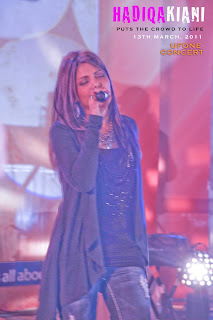