From pop beats to the dance floor…“This is a magical moment,” said Hadiqa Kiani at the press launch of her latest record, Aasmaan. It’s been six years since Hadiqa released her last record, Rung. She was not AWOL completely.There have been collaborations, a slew of them in fact in the last few years. Whether it is a full-fledged English language album like Rough Cut (with Aamir Zaki) or anti-terrorism tune like ‘Yeh Hum Nahin’ or the groovy ‘Mehr Ma’ with Khiza, Hadiqa has been around. But six years is a big break for fans, especially in an industry where female musicians are rare.

And even as the numbers are slowly rising, it is still a predominantly male dominated environment.“I know six years is a big break. But I never walked away from music. I never released an album because I wanted to do a different album, something I have never done before,” said Hadiqa while speaking with Instep Today.This maybe Hadiqa’s first album in six years but she has been busy doing other things including singing in languages as varied as Chinese, Turkish, Persian and Pushto. The reflections can be heard on the new album where Hadiqa sings not just in Urdu but also Pushto and Persian.
It’s too soon to give a verdict to the album. But if the first single, ‘Sohnya’ is anything to go by, fans and music critics are in for a surprise.The video, screened at the press conference, is directed by Sohail Javed. And it is a simple video which serves as a platform for Hadiqa. Seeing Hadiqa move with the beats is a sight to see.
Even though ‘Sohnye’ is a groovy number, there is something inherently local about it. Hadiqa’s vocals soar very high and the usage of dhols has given the song a slight edge. It doesn’t sound like a Western imitation even though it remains true to the ethos of dance music. It hasn’t been ripped off Western beats like songs by bands such as Circle of Trust.The superstar is back
Hadiqa Kiani, alongside her brother Irfan Kiani (who has produced the album) was a sight to

see as she mingled with the press, before and after the press conference.
When she was speaking with the press, Hadiqa floored pretty much everyone when she said, “I know that its not easy to take out time but I’m grateful to all of you for being here. And if you can take out time for me, I can do the same for all of you.”
And Hadiqa made sure that no one was forgotten. From the names featured on the album such as UK-based JKD or sound engineer Kashif Ejaz, Hadiqa mentioned everyone. Also present at the press conference was VJ Naveen Waqar who confessed that she was a “Hadiqa fan”.
Doctor Akbar Yezdani, CEO of Fire Records stated, “I think a lot of hard work has gone into this album. Hadiqa is the female pop icon in Pakistan and we welcome her.”
And finally President of Geo Television Network, Imran Aslam spoke and he accurately portrayed the importance of Hadiqa Kiani to Pakistan and the world at large.
“Is Shor Mein Yeh Awaaz Nahie Gumti (Amidst all the noise, this voice is never lost),” he said. “Hadiqa is versatile and she is modern yet traditional and that is a great achievement. She doesn’t sing on DAT. And when she performs, people enjoy her energy.”
“I don’t think we could’ve done better than this,” said Irfan Kiani while speaking with Instep Today. Both Hadiqa and Irfan maintain that while they grew up on Beegees and Pink Floyd, the times have changed and they are moving with the beat.
“We picked up this genre and there is a market for it. It took us years to release it but we’ve done it. Our surroundings are such that we can’t ignore them. The unstable situation affects everyone. But if one chooses to not release an album, that decision is like giving into the agonizing factors,” says Hadiqa firmly.
Meanwhile Hadiqa is enjoying her role as a mother immensely. The new album is dedicated to her son who she says, “The best thing in my life. Life has changed and gotten better because of him.”
She maybe a mother but Hadiqa is nowhere near calling it quits. Not only is she making a return with an album but she is also a judge on the show, LG Awaaz Banaye Star. And for her the show is important because “it is a student-based”. In other words, the contestants are young students and to Hadiqa, this is how talent will develop in Pakistan And until that happens, there is always Hadiqa…The good and bad news
Hadiqa Quoted: I have worked really hard on my album along with amazing musicians of Pakistan, UK and Belgium. After the release of my album I’ll start touring and will get a chance to meet most of you. Also my official website Hadiqa Kiani will reopen on the day of the release of my album. Thank you very much for being on my side and giving me support all the way during my tough times.
God Bless you all.Luv
Hadiqa Kiani 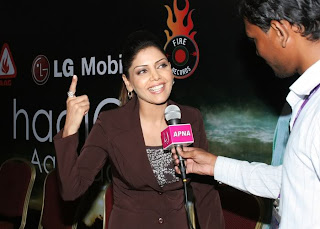 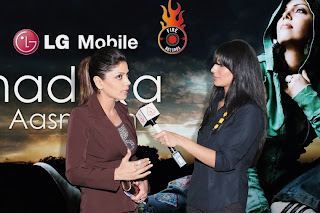 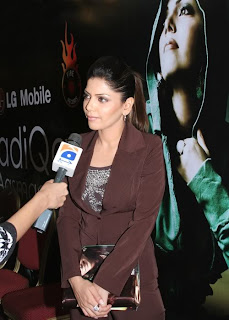